How do you spell “Brittany”? The picture above has four well-known women with four different spellings of the name. It turns out there are nearly 100 different ways that Americans have spelled it. The US Social Security Administration names data lets us tease out all the spellings and find out which ones are most popular – and when.

Here’s how Americans have spelled “Brittany” each year. This is a graph of SSA applications for each spelling of the name, by year. (Click on the graph to make it bigger.) 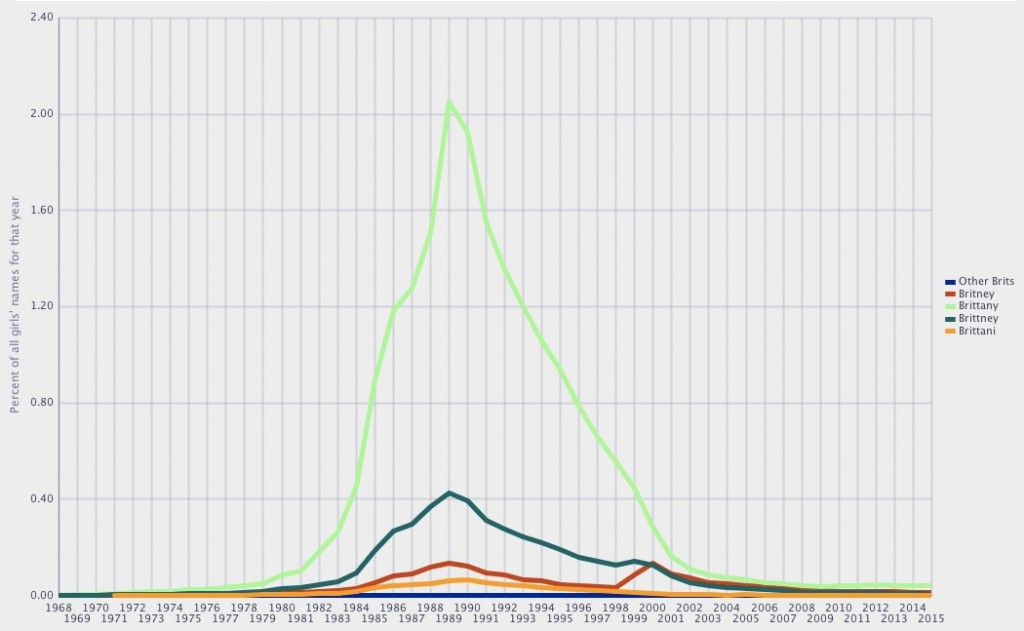 From the graph it’s clear that “Brittany”, the light green line, is by far the most popular spelling, followed by “Brittney”, the dark green line. All the spellings together peaked in 1989, but “Britney” has a sharp peak in 2000, bucking the trend. Why? Well, 2000 is the year that singer Britney Spears released Oops I Did It Again, “one of the best-selling albums of all time” per Wikipedia. Her runaway popularity seems to be reflected in the names people chose for their daughters around 2000.

Britney notwithstanding, Brittany, however you spell it, is clearly a very early-90s-baby kind of name. “Brittany” was the #3 girls’ name in 1989, behind Jessica and Ashley, and was not nearly as popular in decades before or since. In subsequent posts I’ll look some more at names we can identify with specific decades.

What about all the “Other” spellings? I found nearly 100 different spellings of “Brittany” in the US SSA data thanks to a handy regexp. Here are the top ones (and a few others), listed in descending order. The number beside each name is the number of SSA applications for that spelling from 1880 to 2015.

The regexp isn’t perfect. It returns a few uncommon names which aren’t pronounced “Brittany”: “Brittiana”, “Brittiani”, “Brittina”, “Britanya” – and a few I’m not sure about, “Brittnae”, “Brittine” and “Britane”. But on the other hand, it did let me discover that 7 “Britttany”s applied for SSNs in 1990. Yes, that’s “Britttany” with 3 “T”s.

Fortunately, all the “non-Brittanys” the regexp returns are quite uncommon and not even in the top 20. So the regexp will do for the graph of the top spellings above. The following query gets the data by year and look at the percentage of girls in each year named Brittany/Brittney/Britney/Brittani:

I graphed this in SQL Developer.

The picture for this post shows 4 relatively well-known “Brit*”s, one for each of the four most common spellings: comedian Brittany Furlan, author Brittani Williams, singer Britney Spears, and basketball player Brittney Griner.

This site uses Akismet to reduce spam. Learn how your comment data is processed.